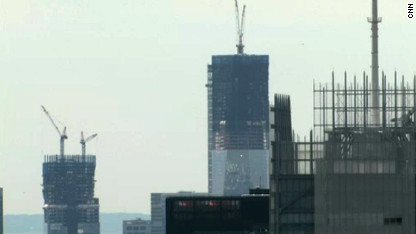 The Big Tease: What's coming up on Starting Point for Tuesday, May 1st

The man Republicans love to hate. Paul Krugman is on talking about his new book (“End this Depression Now!”) and what he thinks the “Real Romney” would actually do in office (Krugman writes, “if Romney adhered to Republican orthodoxy, he would of course reject any action along the lines I’ve advocated. It’s not clear, however, whether Romney believes any of the things he is currently saying.”).

Cal Ripken, Jr. The Iron Man is with us to talk sports and how it feels trading a bat for a hammer (he’s building homes around the country).

And, Michael Jordan! Has a mom who wrote a children’s book about Michael’s younger years. Learn what Mike was like as a tyke. It’s an inspiring read and we’ll have her read a few pages from it. (Also, Mike’s Bobcats worst-ever NBA team? Sorry, have to ask.)

Our panelists John Fugelsang, Will Cain and Ryan Lizza will also join in the conversation.

Is the culture in the Secret Service to blame for Colombia scandal? Author Ronald Kessler explains

There's new information today in the Secret Service scandal in Colombia. CNN has learned the agent who "refused to pay" the escort was Arthur Huntington, who sources say is 41 years old, married and has two sons. He has left the service, but it is not clear under what circumstances.

– non-reputable establishments are off limits while on the road.
– foreigners are banned from their hotel rooms unless it's for official business.
– agents must comply with U.S. Laws even if they're in another country.
– no heavy drinking even when off duty.
– a supervisor will now accompany so called "jump teams," or advance teams.

Ronald Kessler, author of "In the President's Secret Service," talks with Soledad on "Starting Point" on the latest in the scandal. He broke the story about the agents being sent home after the Colombia story broke, and he agrees that the agency has been 'sloppy' in its behavior in recent years.

"If the people at the top set a cultural tone that condones this corner cutting and winking and nodding, that even condones dishonesty in some cases," Kessler says. "For example, they ask agents to fill out their own test scores and physical fitness tests. Then, of course, everyone says we can do whatever we want, if they are idiots, which is what we saw in Colombia."

"When it comes to these rules, you know, it's as if these agents are kindergarten kids," Kessler adds.

See more from the interview in the video above.

General James "Spider" Marks talks about the stepped up search by U.S. and African military forces for notorious warlord Joseph Kony. Marks explains that troops face two major challenges: capturing Kony and his army as well as fighting through infested waters, crocodiles, pythons and other environmental factors in the area.

The man who assassinated Robert F. Kennedy Jr. may soon get a new trial. A federal court could rule any day now on a challenge to Sirhan Sirhan's conviction, based partially on a theory that there was another shooter.

It's a theory bolstered by Nina Rhodes-Hughes, a fundraiser for RFK. She was at the Ambassador Hotel on the night he was gunned down in 1968. Nina not only heard shots from two different directions, but she says there were more than eight. Sirhan's gun could only hold eight bullets, and his defense team is expected to use her testimony in its court filings.

Nina talks to Soledad this morning about the shooting, and explains why it was 'devastating' when she saw an FBI report didn't include her claims.

Soledad O'Brien speaks with investigative journalist Richard Miniter about the Obama administration and Romney campaign’s views on politicizing the 1-year-anniversarry of the death of Osama Bin Laden.

The importance of Chen Guangcheng, and how it could affect U.S./China talks – Author Gordon Chang weighs in

A shocking and daring escape of an activist in China could create big fallout in our relationship with China.

Blind Chinese dissident Chen Guangcheng evaded layers of guards after 18 months under house arrest, and reportedly made his way 370 miles northwest to the U.S. Embassy in Beijing. This comes just days before Secretary of State Hillary Clinton and Treasury Secretary Tim Geithner are expected in the Chinese capitol for long-planned economic and strategic talks.

Neither the Obama Administration nor the Chinese government have confirmed Chen Guangcheng's whereabouts, but a former senior China analyst at the CIA says "This is the greatest test in bilateral relations in years, probably going back to '89." And 1989 of course was when Tiananmen Square unfolded.

This morning on "Starting Point with Soledad O'Brien," author and Forbes.com columnist Gordon Chang explains why the Chen Guangcheng scandal could affect U.S./China talks, even though it shouldn't.

Gordon Chang of Forbes.com kicked off today's playlist with "Gimme Shelter," the Rolling Stones classic that Rolling Stone (the magazine, not the band) called the 38th greatest song of all time.

"With or Without You" by U2 made Christine Romans' playlist this morning. The 1987 number one hit also made the Rolling Stone best-of list, and is one of U2's most recognizable songs. Christine also picked Coldplay's "In My Place," a Grammy-winning 2002 hit for the band.

Jay-Z and Kanye West's "No Church in the Wild," from the duo's 2011 collaboration Watch the Throne was Steve Perry's playlist pick today. The album from the two rap giants was one of the most successful releases of last year.

Author Richard Miniter stopped by the Starting Point set today and brought along Rod Stewart's "Maggie May." The song achieved huge chart success upon its release it 1971: it topped the singles charts on both sides of the Atlantic at the same time its parent album Every Picture Tells a Story topped the album charts.

Roy Orbison's "Workin' For The Man" made author Ronald Kessler's playlist this morning. Orbison, who had a hit with the song in 1962, had a career resurgence in the late eighties thanks in part to his work with the supergroup The Traveling Wilburys.

CNN Sr. Political Analyst Ron Brownstein was a panelist on today's SP and contributed a couple of song's for the playlist: "Girls Talk" by Dave Edmunds and Bruce Springsteen's "The Rising." The latter song was written by Springsteen in response to the September 11th attacks, and takes on a new meaning today as the new One World Trade Center rises above the Empire State Building to become the tallest building in New York City.

Actor and director  Bobcat Goldthwait was a guest on today's Starting Point and he contributed a couple of songs for our playlist: Billy Bragg's "Waiting for the Great Leap Forward" and "Celluloid Heroes" by The Kinks.

Should there be more teacher surveillance in the classroom? CNN education contributor Steve Perry weighs in

One of the teachers accused of being caught on audio tape bullying a 10-year-old boy with autism is on paid leave this morning.
But Kelly Altenburg's attorney says his client wasn't even at work that day.

The stunning recordings were caught on tape after Stuart Chaiffetz sent his son Akian to school wearing a recording device. You can see Soledad's interview with Stuart here.

Many special-needs advocates call this a wakeup call for school districts across the nation. But should parents be wiring their kids to monitor their teachers?

CNN education contributor Steve Perry talks with Soledad on "Starting Point" this morning on the story, and agrees with parents who want increased monitoring of their children's teachers.

Get Real! Rooftop missiles for Olympics?

British military could use rooftops in London to mount missiles to help fight terrorism during the Olympic Games.