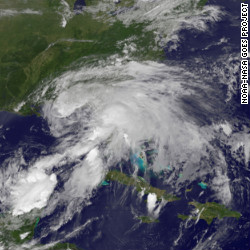 Our Starting Point for Monday morning.. the Gulf of Mexico. Tropical Storm Debby has already spawned at least one deadly tornado in Florida, we've got live reports from the storm's path and the latest forecast.

A big update on the leak controversy in Washington. We'll have an exclusive report from Suzanne Kelly who's got news on what the intelligence community is doing to try and crack down on leaks.

The definitive expert on all things Supreme Court, Jeff Toobin, joins us as we await decisions on immigration and health care reform. (Toobin makes news when he talks SCOTUS, here's what he said after the arguments on health care reform, it's worth a listen.)

Michele Bachmann made a campaign out of promising to repeal President Obama's health care reform, we'll talk to her (8am ET) about the pending SCOTUS decision.

And the Muslim Brotherhood wins the presidential election in Egypt.. Jamie Rubin joins us (7am ET) to talk about implications for U.S. and Israel.

Chaka Khan, 8:30am ET, talking about 33 women from New Orleans and their life-changing achievements.

Mira Sorvino, 8:50am ET, joins us to talk about her new movie, "Union Square"

And the projected #1 pick in this week's NBA draft, Anthony Davis, joins us to talk hoops, 8:10am ET.

All this and more live on "Starting Point with Soledad O'Brien" at 7am Eastern on CNN.