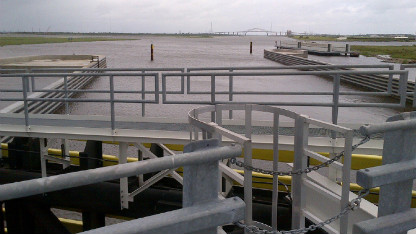 We walked along the top of the wall of this surge barrier as peaceful small waves rippled along the lake on one side and a swelling choppier Gulf of Mexico rose on the other.

"The wall" is what has kept Jackie Grosch from packing up and leaving town. Jackie lives in St. Bernard Parish has spent the last seven years rebuilding her home destroyed by Hurricane Katrina.

"The upstairs was spared," Jackie says, but the first floor practically disintigrated. Seven years ago I was doing liveshots by Jackie's exposed spiral staircase. The lower walls of her home were gone.

Today she's riding out the storm because she's confident in that wall.

Earlier this morning, we reported that water has overtopped levees in Plaquemines Parish and officials fear “deep flooding” there.

In Plaquemines yesterday, there was concern over whether two levees outside of the federal system would hold. Several backhoes, a tractor and a dozen trucks full of gravel worked through the light rain, trying to lay a gravel road over massive sandbags standing five feet tall and three feet wide that were brought in at the last minute to replace a failing floodgate. 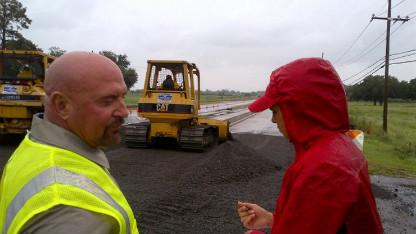 The parish has a mandatory evacuation order, and by early afternoon the parish announced a curfew. About 300 people had settled in to cots and chairs in three shelters, including a church and a highschool.

Plaquemines Parish sits just southwest of the mouth of the Mississippi River and it went under during Hurricane Katrina. This morning on "Early Start," parish President Billy Nungesser addresses reports this morning that two people were stranded on the levees as water was overtopping them.

"Our pump operators stay in the pump stations as long as they feel safe," Nungesser says. "These workers saw the water coming over the levee, got in their vehicle and headed out. It came up within minutes to where they didn't feel safe driving their vehicle any further. So they stopped on the levee and we began to try to get to them to get them out of there."

"The parish is inside the [federal] levee system," says Sheriff Lonnie Grieco, Sr. "We're hoping we can make it thru this wave here. You never know what mother natures is going to bring us."

Donald Taylor, who came to the shelter with his parents, sister-in-law and his nephew, amused himself by playing videogames. He was a teen when Katrina hit.

Evacuee Wilma Taylor was surrounded by her grandchildren. She was resigned to a long haul.

"I aint nervous long as I'm around a lot of people chit chattin I won't be nervous," she says.

The storm hit just before 7pm local time, and we felt the strong irregular gusts and occasional sheets of rain: the tell tale signs of an unpredictable storm. So far, the water had not risen much, but there is a lot of rain still to come.